A couple years ago, we, the New Life Sounds Choir met a Korean pastor, Pastor Yang, who frequently visits Cebu for missions. He invited us to visit Korea on a music ministry mission. Well, it seemed like everything came into place, and so we did.

Heart-warming welcome at the airport

The New Life Sounds Choir and some family members

We prepared hard for that mission trip to Korea. First, because we aren’t a very musically advanced group. Most of the members in the choir are 40 years old and above, with just a few of us in our pre-adulthood. With that, one can expect that the learning capacity of the choir isn’t really very fast, or its singing, so raw. We worked hard for many months trying to enhance our singing, and to learn a whole acapella repertoire. (Those familiar with our choir know that we rarely sing acapella. We usually sing to an accompaniment track). Generally, when a choir goes on tour, it’s most practical to have an arsenal of acapella songs for venues with no sound system and also for impromptu singing. We also aren’t trained singers so we’re not used to singing with only a condenser mic, or nothing at all.

Next concern was the budget. It’s almost always the concern. Airfare sale for flights to Korea weren’t very popular that time when we booked our tickets. Round-trip tickets to Korea at that time, regularly cost not less than 10,000php (ours was 13k), so it’s somehow a pretty heavy load. Though, the host pastor was so generous to us he offered us free accommodation. God provided the rest, and so all were able to make the trip. Not just the choir members alone, but even some members were also able to bring family with them (we’re one of them).

Most importantly, going on a ministry tour is not just as simple as “perform and go.” You’re on that tour for a purpose. God placed you there. We were prepared for a heavy mission trip. Singing daily to different groups of people, maybe hospital visitations, feeding (if Korea ever needed that. haha) etc. I personally, had already set in my mind then, that the trip is not for leisure. I’m here for ministry. We were just allowing God to use our music to touch lives, heal the sick, and mend the broken. But the moment we step foot in Korea, many unexpected things happened.

Together with 4 other members of our friend choir from Manila, Coro Cantabile, we were in Korea for 8 chilly spring days of April. Despite having been through many uneventful circumstances, before, and even during the trip, we could really see God’s hand at work.  We thought we were on for some heavy work, but the host pastor wanted it to be more of a cultural exchange and immersion. Ptr. Yang loves his country so much and is so proud of it that he wants us to experience it to the fullest. So we actually ended up doing more leisure, way more than we expected. We thought that was a trip to bless others, but we were the ones getting blessed instead.

The Philippines and Korea have a very long-standing relationship which we never knew before, and which only a few Filipinos know about too. Fun fact: We were actually the very first Asian country to come to their rescue when the Korean War broke out. The Philippines also built iconic landmarks for them such as the Jangchung Gym right in the heart of Seoul and the American Embassy, among others. Hearing stories of how the Koreans looked up to and admired the Filipinos, and how that drove them to rise from shambles after the war, stirred up so much hope in us for our country in this time of despair and uncertainty.

We were able to do a lot of singing somehow. We sung to the church’s school (Arumdaun School) for the out-of-school-youth, where a lot of the students are society’s problem children, most of which are bound deep with vices. Well, we just did what we were supposed to do. Love on them through music.

Singing to the students of Arumdaun School 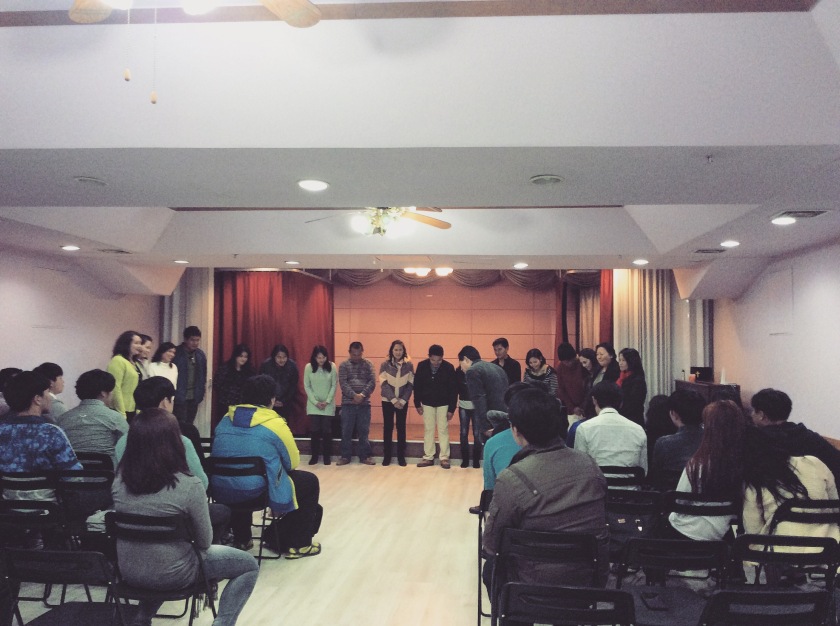 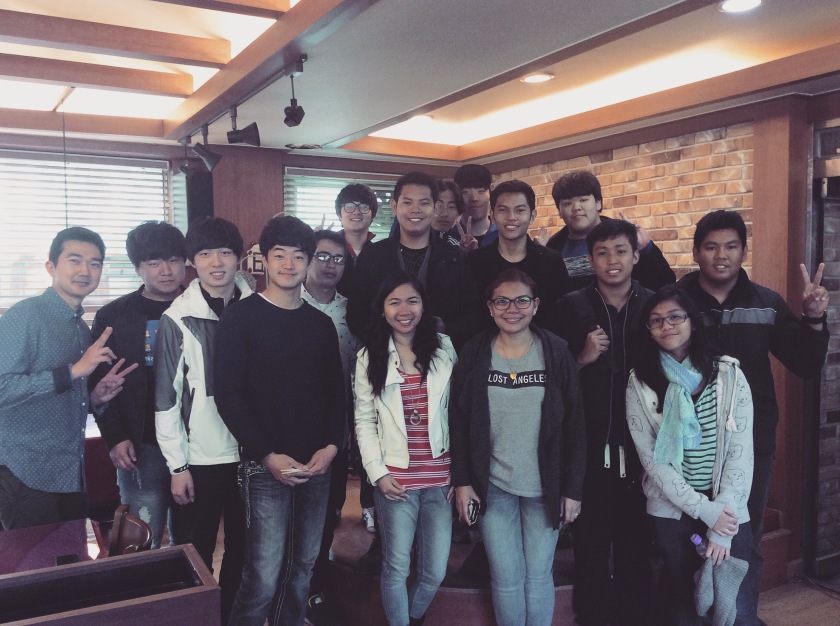 Sunday of that week, we were able to sing for the congregation in 3 services at Incheon Sungkwang Prebyterian Church, and also at a service in Majeon Methodist Church. 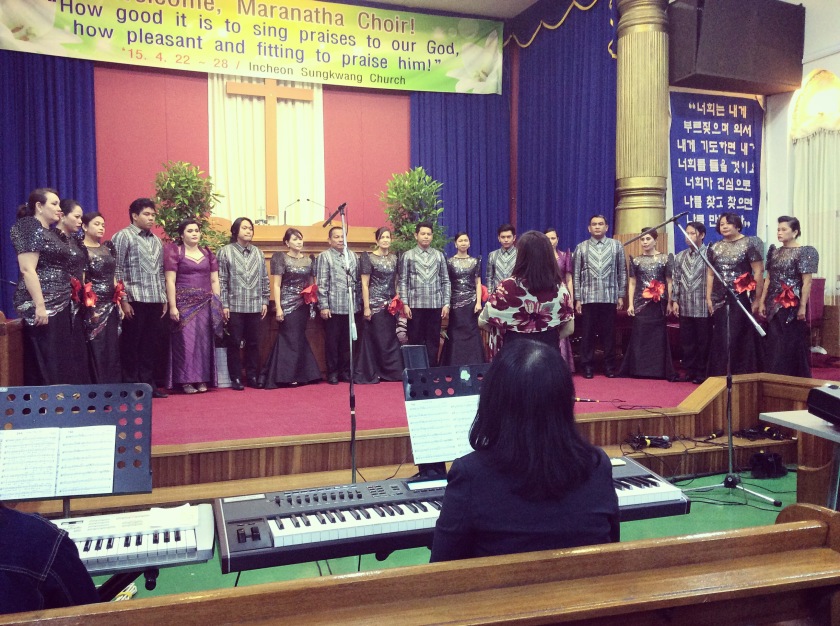 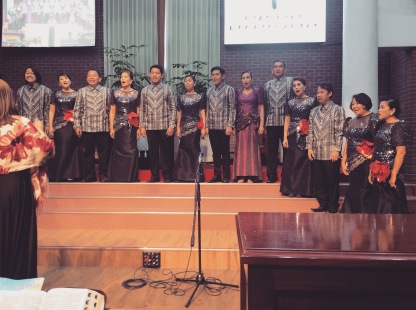 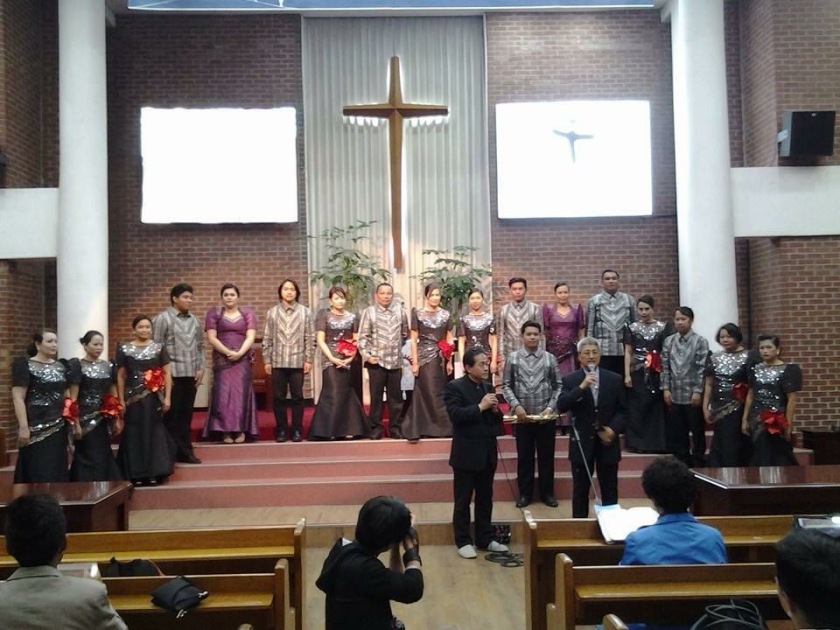 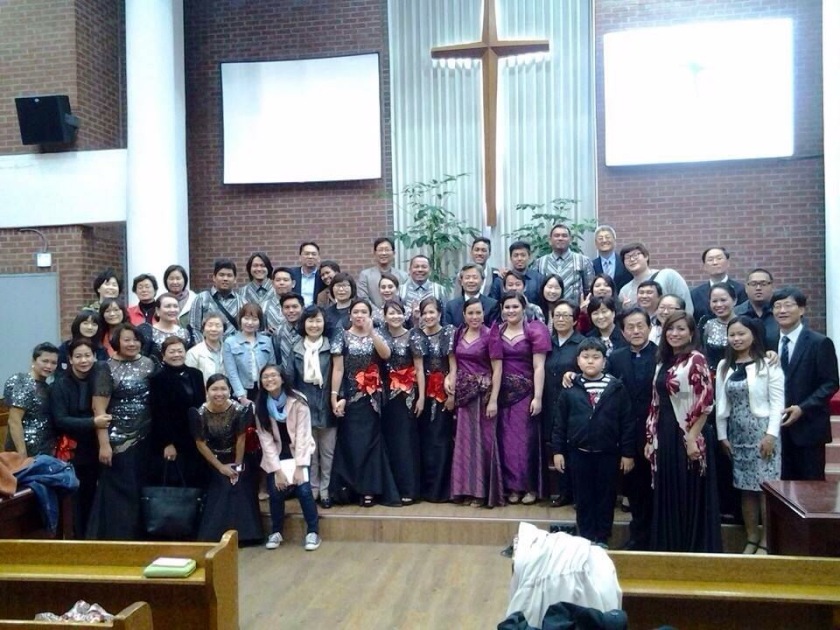 With some church members

We were also able to just randomly sing at popular tourist spots we which we were visiting, like Seoul Zoo, Songdo Global City River Cruise, among others. Just like a busker! That’s actually one of the things in my bucket list. I’m glad I was finally able to do it with the choir, and it’s just such a blessing to see people enjoying and admiring your performance. Truly, music is one of God’s medium of spreading joy.

One of the things that struck us the most, was how kind and generous the Korean people are. They also have such great servant hearts. Some of the Korean people assisting us in the whole duration of the trip went on leave from their respective jobs only to serve us. So heart-warming. What a blessing!

I can go on and on. What I had previously, negatively thought of Korea all changed after having had the opportunity to visit Korea. Right now, I only have good things to say about Korea.

That trip I can say, was somehow God’s reward to us. But before you say I’m all selfish or self-righteous, let me tell you that when you seek God with all your heart, and focus on the things of His Kingdom, He is so faithful to grant the desires of our hearts. And indeed, He really knew our hearts’ desires! Plus, all these blessings came at such a time of weariness in each one of us in the choir.

God really had something else in mind. He surprised us, and I never felt so blessed and loved before.