Our early morning JetStar flight to Ho Chi Minh (Saigon) was very exciting. As the airport slowly came alive, the queues started to build up, we wondered why our flight schedule still wasn’t flashed on the screens. We asked some airport people but they only told us to wait…over and over again. Next thing we knew, our flight was already boarding! We almost missed our flight! But thank God for some people who helped us and let us cut through the line. And boy was the run from check-in to the gate, long! Haha

We arrived in Tan So Naht International Airport at around 9am and took a bus to the popular Ben Thanh Market, just a few steps away from Pham Ngu Lao, which is their backpacking district. From Ben Thanh, we walked a few blocks to our prospect hotel, Duna Hotel.

Panoramic view from our room at Duna Hotel

In trying to experience backpacking to the fullest, we never made bookings for anything on that trip, except for our round-trip tickets. We wanted everything to be spontaneous. It’s also a good way of checking if your prospect hotel is good or not; giving you a chance to  find another one that you may find better once you’ve already seen it in person. Anyway, we found Duna to be alright. It was situated right on the main street, across a park which had nightly cultural shows, with Subway and Baskin Robins for neighbors. Very close to street food too (*screams OUR MAIN PRIORITY)! 👍🏻

After settling in and some refreshing, we asked the front desk attendant to get the address of the Lunch Lady, a popular hole-in-a-wall in some alley. The Lunch Lady had been featured by TV personality and chef, Anthony Bourdain, on his show. A now tourist spot, the “lunch lady” doesn’t have a fixed menu, she only prepares what she’s in the mood for on any given day. Anthony said it first, it really is good! 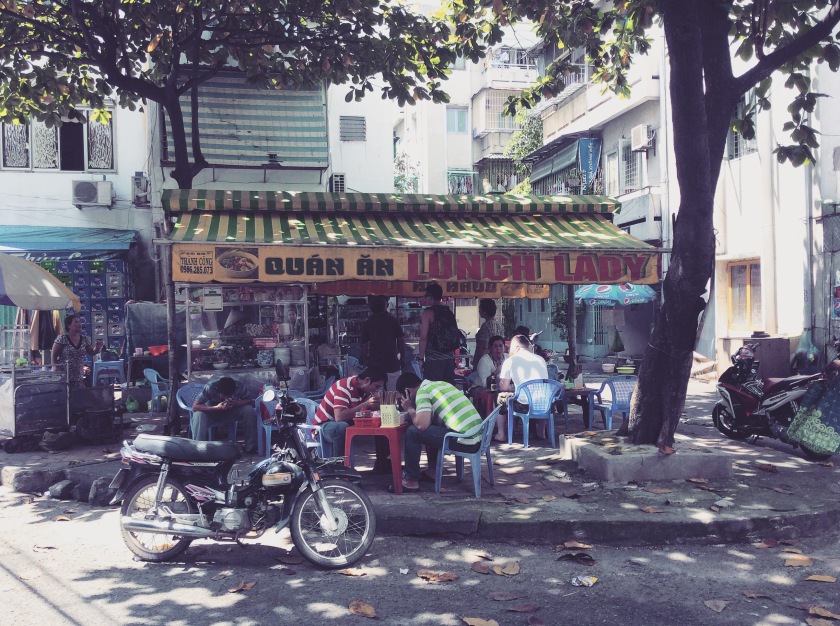 Meal at The Lunch Lady

We only had a little less than 3 full days in Saigon, so we tried to cover as much as we could. We visited places that packed much of what the city had to offer, and of course, their tragic war history (Indochina and Vietnam Wars).

We booked a 1/2 Cu Chi Tunnels and 1/2 city tour for a day, through the front desk for a very minimal fee (we wouldn’t have booked it if it weren’t). They schedule you for pick-up on their tour bus. It’s a great way to meet other tourists. It was also kinda funny as we were the only non-Caucasians on that bus.

The Cu Chi Tunnels are a vast network of underground tunnels used by the Viet Cong in their resistance to American forces during  the Vietnam War. Probably one of the most popular sites in Vietnam. There, we experienced hunkering through a 150-meter, multi-level tunnel in total darkness. I was drenched in sweat when I came out, and I almost could not catch my breath. Now, can you imagine being in the Vietnam War with that adrenaline and fear? I would’ve died instantly! haha 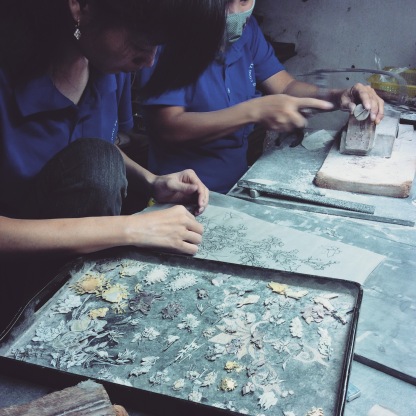 One of the tunnels on the way to the entrance

Walking to the entrance 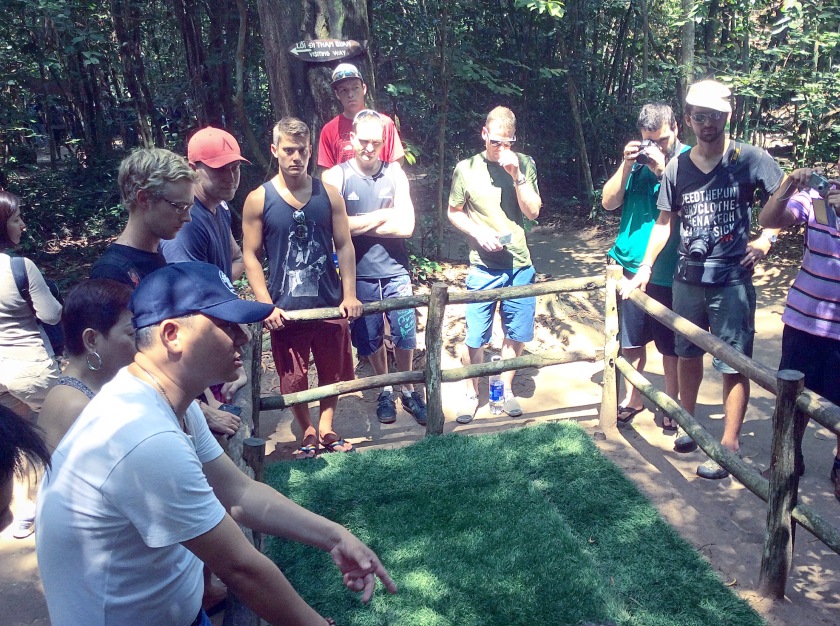 Our tour guide showing us one of the booby traps 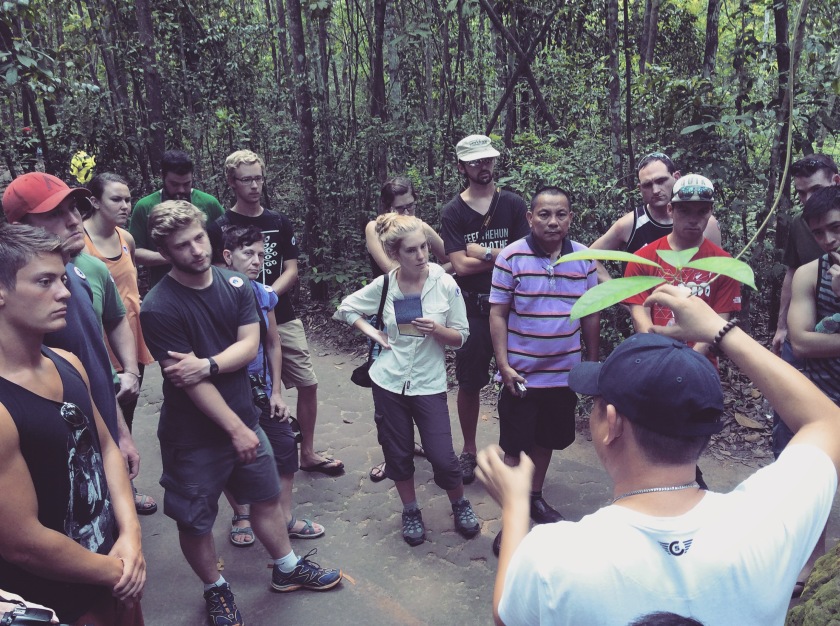 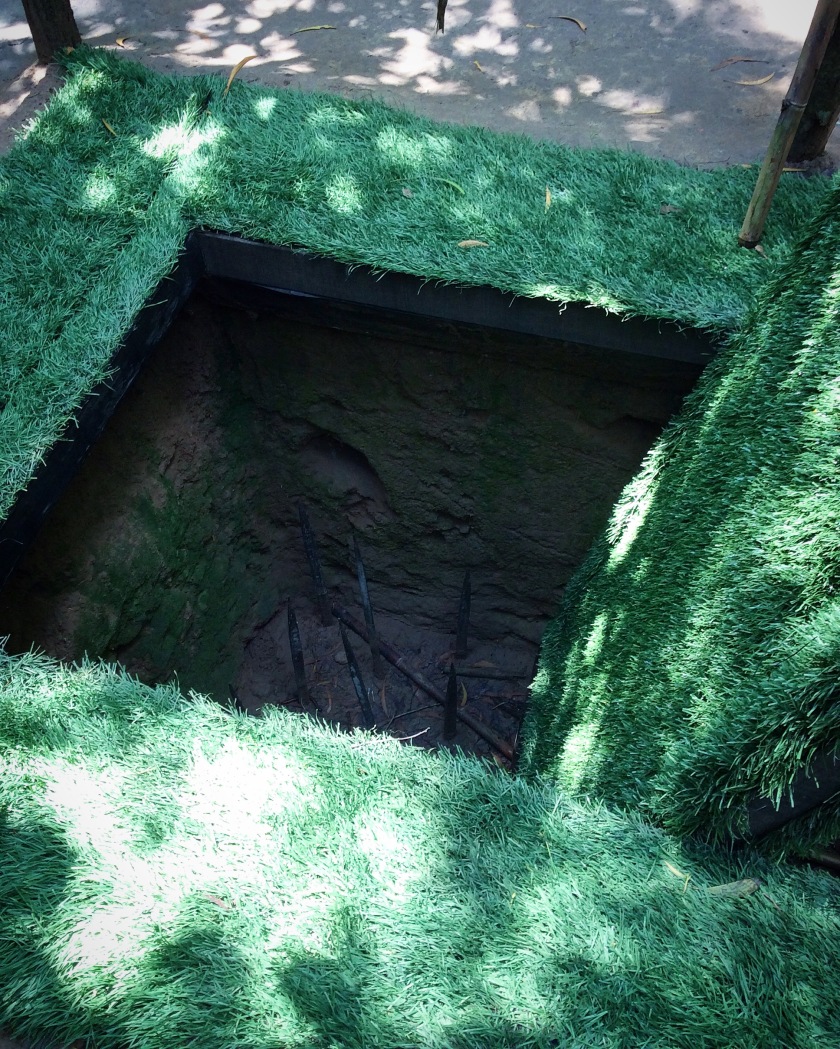 A closer look into a booby trap with punji sticks 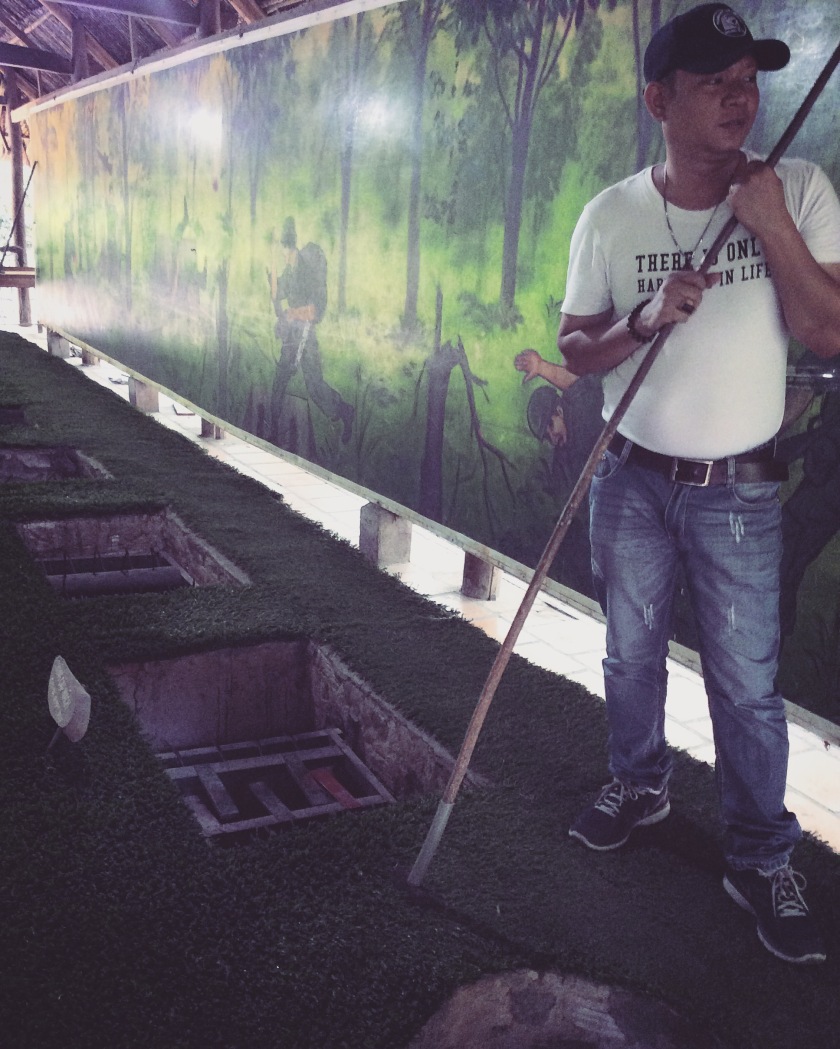 One of the tunnel entrances

We were also served Viet Cong staple food– boiled/steamed cassava with a peanut and sugar dip, and some lovely jasmine tea. 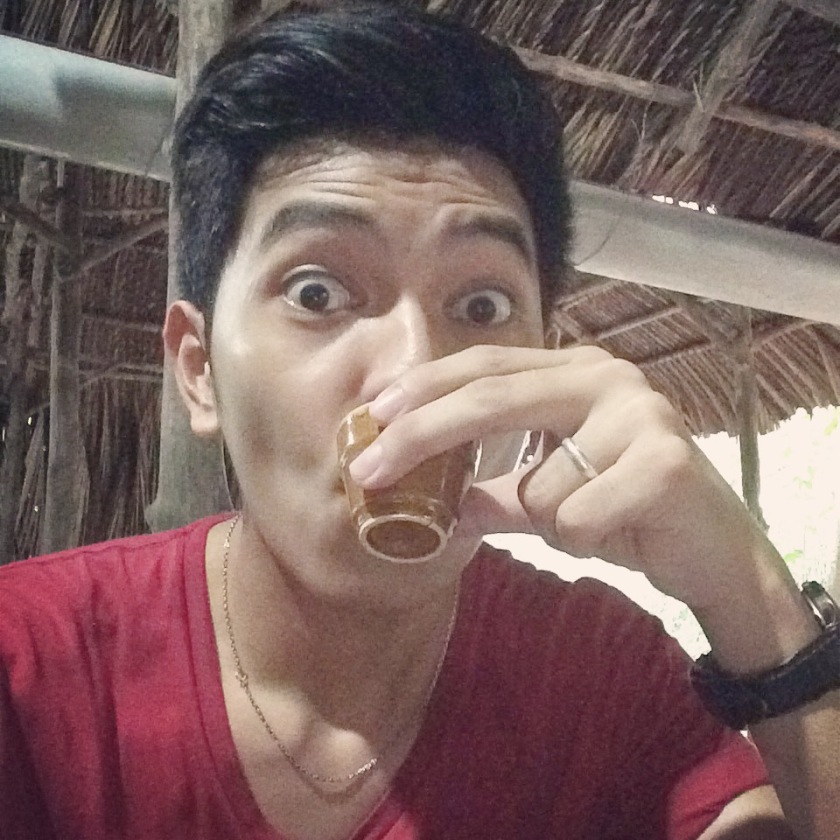 I forgot to take a photo of the food. 😀

At the end of the tour, you are directed to an area where you can buy some refreshments and souvenirs. If you’re in for more thrill, you can also try firing a variety of Vietnam War era weapons in the firing range. 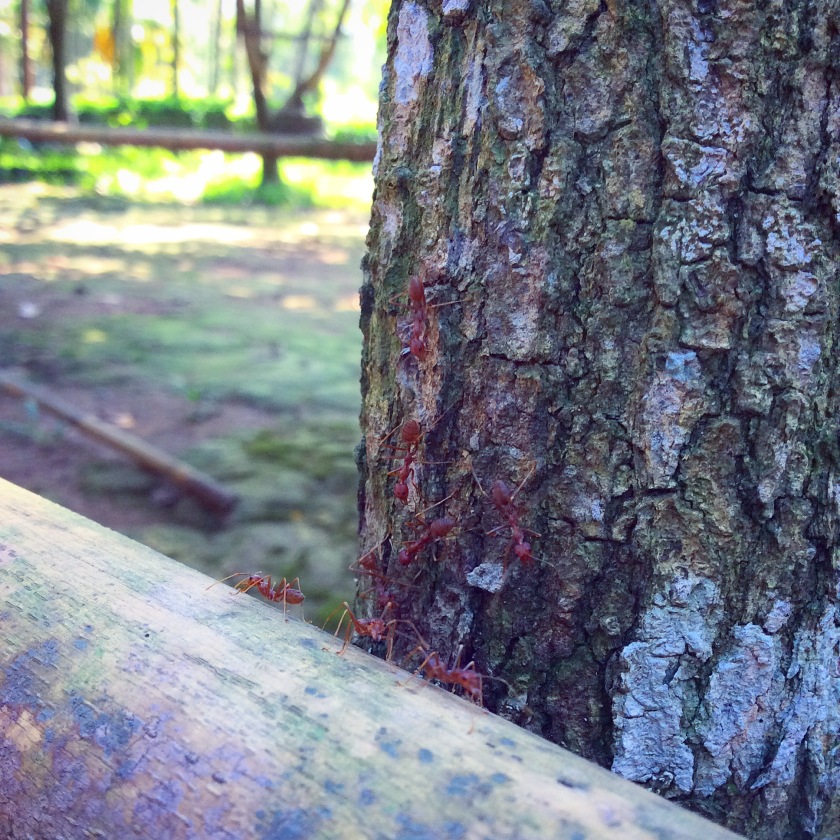 Some ants I found in the area

After the Cu Chi Tunnels tour, the bus dropped us off at the War Remnants Museum to start off the other half of our day–the city tour. I can only say very little about this place. VERY HAUNTING. It houses a massive gallery of war documents, photos, artifacts, and the very damaging effects of the Agent Orange. Agent Orange continues to affect newborn babies even up to this day.

The area looks like one from a European city.

I expected a more grandiose interior. Nevertheless, its simple design was still worth a shot. 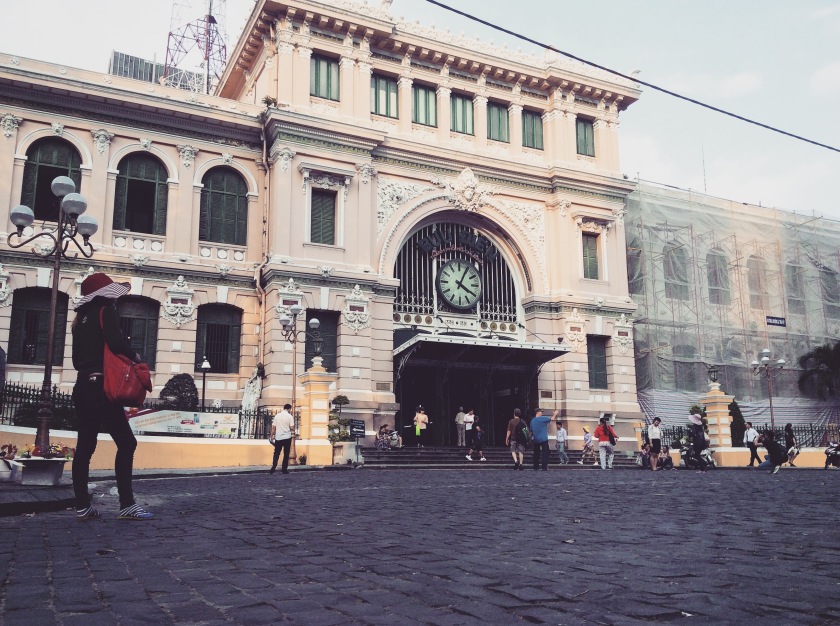 The locals say, “no motorcycle, no honey.” Motorcycles are somehow considered a status symbol for many. Men use it to attract a mate. It is also believed that there are more motorcycles in Vietnam than there are people. I don’t know. haha

Most small establishments in Vietnam are built very thinly like these. 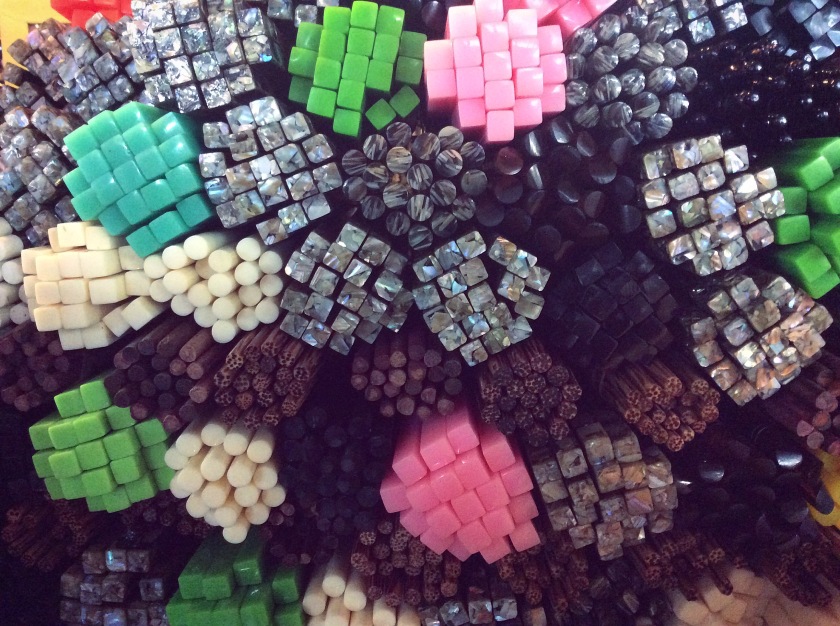